Link to my music store;

The Train Station of Pine Needles 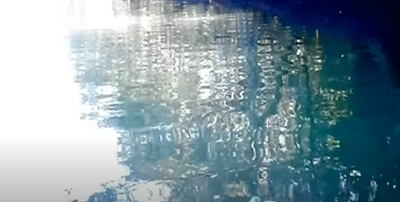 It was a sun-soaked day. We were at Gough Whitlam Park, somewhere in the vicinity of Wolli Creek.

The train station loomed beside the muddy creek, nestled amongst a forest of Australian pine trees. The pines had dropped their long fronds and covered the entrance to the station in a twiggy sea of brown and faded green lined patterns.

The station was an old structure made entirely of oak, giving it the mixed resemblance of a tree house and a medieval ship. Above the train tracks was a crisscross of timber walkways that connected gnarled wooden towers, overshadowing the platforms, which housed abandoned shop fronts and cafes.

I walked towards the station, trailing behind Eddy who carried a large backpack, his eyes covered by rectangular black sunglasses. We had to cross to the other side of the station to get to our train's platform and in order to do this we had to climb the station's lumber stairways to cross the train tracks. The stairs were covered in pine needles and I listened to them crackle and crunch under my boots as I ascended them. The stairs climbed higher until they reached a large complex of terraces and empty rooms that once entertained a bustle of people, food and artisan stalls. It was now a melancholy, empty place.

Eddy was walking quickly ahead and he was so eager to get to our train that I lost sight of him as he crossed a high walkway across the train tracks and disappeared into a dark building across the way. I followed after him and crossed a crooked wooden footbridge, approaching a doorway at the bridge's end.

Upon entering the old building I was surrounded by dusty brown shelves and tables. Clay flowerpots with small, red flowers were lined up and neatly spaced along the shelves and tables. I walked through the room of pots to a staircase that spiraled downwards and began to descend the creaky stairs. I was several stories above the platform and as I made my way down the spiraling stairs I passed more rooms full of clay flowerpots, neatly arranged, and old people stooped and browsing the pots with intent interest as if they were admiring paintings in an art gallery.

The stairs led me to the station's platform where there was a sea of old people milling about. I caught sight of Eddy's face poking up above the sea of white heads and I walked towards him further down the platform, trying not to lose sight of him again.

I finally caught up with Eddy, who had dumped his backpack and was sitting on a waist-high wooden beam. The platform was built above the muddy creek and through the gaps in the wood I watched the brown water flow beneath in a pleasant sounding trickle.

A sound of metallic, squeaking brakes startled us. Our train had arrived. It was a big, steel steam train that blarred a loud horn as it pumped a great jet of cloudy steam from its funnel. This train only had one destination which was an express service to the Hunter Valley. Eddy and I boarded the train, found some comfortable seats and I dozed off into a deep sleep before the long journey up the coast began.

Eddy roused me from my sleep. We had arrived. We disembarked the train onto a small concrete platform that sat in a giant field of yellow grass that stretched out into the far distance. This train station was completely deserted and windswept. We walked down the platform, passing by a vacant ticket stall, and made our way to a bitumen road that snaked its way through the windy, grassy plain and over a distant hill. We set out on foot and began following the road. The grass eventually turned from yellow to grey. The sky was pale and sunless.

After a few hours of walking we arrived at a clearing in the grass that was dotted with man-sized holes in the dirt. It gave the impression of a rabbit warren for large rabbits. This is what Eddy and I had come all this way for and we were excited to explore this maze of tunnels to see where they would lead. We slipped into the nearest hole and made our way down into the earth, stooping our heads as the tunnels were only about 5 feet high. Occasional beams of light from other holes would illuminate the tunnels, but as we descended deeper the tunnels began to glow an orange colour. There was an otherworldly light source coming from the earth itself and so we could see quite clearly deep in those tunnels.

As we made our way deeper underground little alcoves began to appear, etched into the dirt walls, where old rags and bedding were arranged. It seemed that people had once lived in these tunnels, but they had all vanished. It felt spooky so we decided to leave.

As we made our way back to the surface, the orange glow had become dimmer and we struggled in the dark. Eventually the beams of light from the holes in the surface appeared in the distance and we followed them until we reached an entrance to the grassy field. As we clambered out of a hole we noticed that the grass had become greyer than before and the wind was blowing in great gusts causing the expanse of grass to rise and fall like waves in a cold ocean. 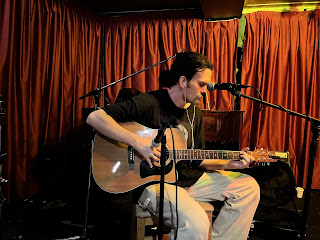 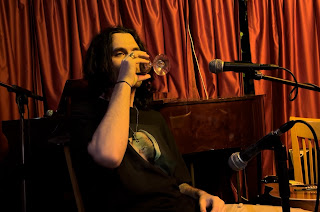 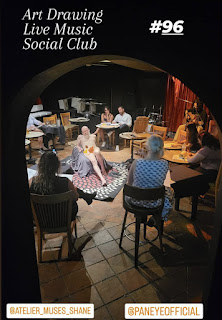 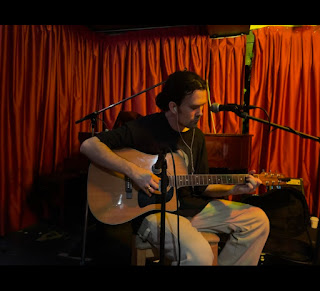 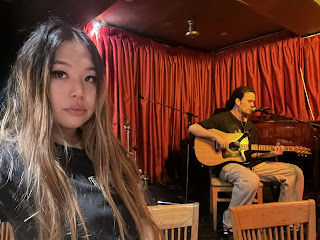 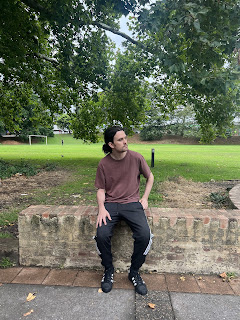 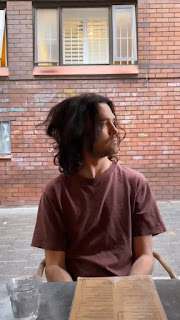 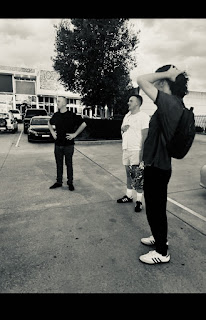 My left and right hand men
Posted by WT at 2:36 AM No comments: 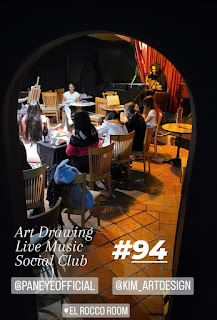 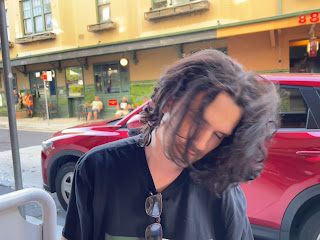 Pre-gig meditation at El Roco
Posted by WT at 2:35 AM No comments:

My greatest musical influence on my new T-shirt - October Rust. Introduced to me many years ago in a school yard in Glebe by Jasper
Posted by WT at 1:55 AM No comments: 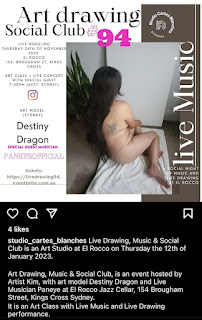 I’ve been booked for my second gig at El Roco (Sydney’s oldest Jazz club) for Jan 12, 2023. I’ll be playing acoustic ballads while the audience sketches the nude Destiny Dragon
Posted by WT at 2:57 AM No comments: Waiting for my pork ragu, outside kings cross police station. Ahhh the taste of freedom and a clean, bright future.
Posted by WT at 10:39 PM No comments: