Sitting in the black park 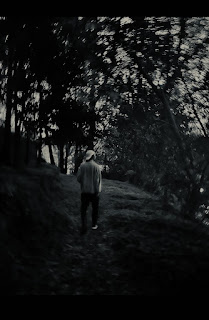 On top of the hill, in my old childhood suburb, I sat and stared off into the distance. It was a grey day and the sun was sinking low behind a long spine of clouds that stretched beyond the Cooks River. That winding, muddy river where I used to walk alone for hours after school, listening to my sony discman. My favorite song back then was called Wolf Moon, and I used to find it such a darkly romantic song. The perfect soundtrack to my naive teenage angst, as I sat in the mangroves and watched the river flow by.

I don't know how I ended up on this hill. I had long since moved on from this place. But here I was.

I looked down the hill towards the nature strip that lined the road, right by the school for special children.

That nature strip, where I used to play tag with the neighborhood kids, seemed so much bigger back then. The school was still the same though. A small, empty school where I used to ride my skateboard after the special kids had left for the day. I used to find it such a peaceful place. But now it just seemed sad and empty.

I walked down the hill towards the park with the dead grass and cricket pitch encased in a rusty cage. I had spent so many hours in that park, throwing balls to my brothers and chasing them around the old cage. We used to climb all over that cage. It was our obstacle course. The concrete cricket pitch underneath the cage was the lava. We were like monkeys, swinging ourselves around the cage. We'd drop ourselves onto the grass and race to the old soccer goal posts at the end of the park. We'd climb up and down those tall, metal goal posts and see who was fastest.

By the time I reached the park, the sky had turned black. The park sat just in front of my childhood house. A huge house that the kids in the neighborhood thought belonged to a witch. It was a house with many pointed frames, almost like a large, wooden church.

I entered the park and walked to the middle of the grassy field, beyond the rusty cricket cage, and sat on the grass. I was surrounded by the night and the shadows.

Nobody could see me there in the black park. I sat silently and watched the lights in my old childhood house. I watched the outlines of people move inside the windows. I saw the shadow of my mother through the window, her crazy, curly hair unmistakable. She was moving around upstairs. I saw my dad. I heard his deep, booming voice calling me for dinner. "Willy! Wiiilllly! Dinner's ready." I smiled to myself as I sat there, letting the memories and my imagination take over.

Sitting in the dark, I felt like the bogeyman. Nobody could see me there.

"What are you doing here?"

I looked up. "Why are you sitting out here in the dark?"

Johahn had found me. I felt a bit embarrassed. She must have thought I’m weird, sitting out here alone. 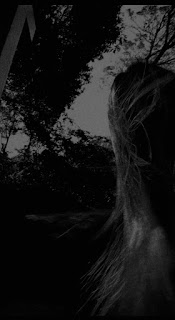 "What are you looking at?" Johahn asked me.

"Oh, I'm just watching my old house. The lights. I can see people in there."

Johahn looked confused as she turned towards my old house.

"Come on, let's go" said Johahn as she smiled at me. "You're such a strange man."

I got up and we left the park together, walking towards the river in the distance.