The Greater Key of Solomon: Stronger and More Potent Conjuration

Warning: I am recounting a terrifying experience I had with black magick. I am writing this approximately one day after having this experience.

Before I recount my experience with black magick, I want to provide some background on how I became involved with it.

I have been interested in the occult and esoteric religion for quite some time, having read a large number of books on the subject. From Manly P Hall to Kenneth Grant, I have found the literature fascinating. Although I was always undecided about whether I believed in it, I have appreciated how important it has been to many leading figures in history.

Several months ago I was browsing an antique shop and found a golden Seal of Solomon necklace and I began wearing it as a good luck charm. My great grandfather was an English Freemason and my great grandmother is Jewish, so I found it appropriate to wear. I also recently inherited my great grandfather's Freemasonic ring and started to wear it too. You can see these items in the photo below. 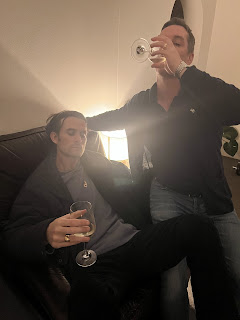 Since I began wearing the Seal of Solomon, some unintentional and frightening photos of me have emerged. I started to suspect it might be related to the powerful hexagram I was wearing. You can see the Seal of Solomon shining brightly around my neck in the photo below, whilst enjoying a night of music and drinks with my old friend Barry. 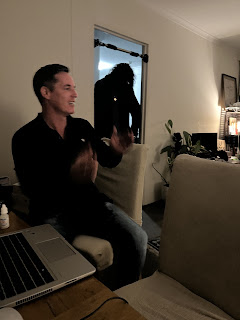 Johahn, who was with me when I bought the necklace from the antique shop started noticing the eerie photos. 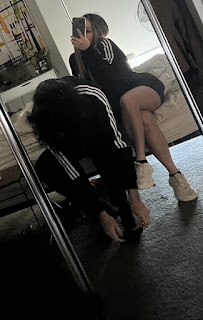 This brings me to the present and the terrifying experience I had with King Solomon's magick.
Three days ago I purchased King Solomon's Grimoires - The Greater Key of Solomon, The Testament of Solomon and The Lesser Key of Solomon. I was unaware of the serious nature and legitimacy of these books. I purchased them in both written and audiobook format to listen to while nursing my broken leg. I found listening to audiobooks in the evening soothing and I initially started with Manly P Hall's books. This led me to King Solomon.
King Solomon is an ancient Israeli monarch who became famous for his ability to control demons with seals and spells. I became increasingly interested in King Solomon during the course of my readings into the occult as it was apparent that he was the oldest and most revered of all the occult mystics. While I found it fascinating, I was unaware of the true danger involved.
As night fell, I put on my headphones and began listening to the translated audiobooks of King Solomon. These translations were made by Aleister Crowley (amongst others) who was the leading English occultist.
As I listened to the introduction of The Greater Key of Solomon, I drifted off to sleep. All I remember from the intro was the narrator warning of powerful evil spells.

What happened next is the most terrifying experience I have ever had.
I had a dream, which felt more like sleep paralysis, where I was in my bedroom and strong incantations were swirling around me. Cold, strong fingers grabbed my broken leg, causing it to violently jerk up and down in a fit. It was like I was having a seizure, but it was originating only from my leg in powerful spasms. I could distinctively feel fingers drumming and tapping up and down my leg and the presence of an entity in the bedroom.

This abruptly woke me up. I threw the headphones off and looked at my audiobook. I had reached "Chapter 6: Stronger and more potent conjurations" which had been playing for approximately 2-3 minutes. The narrator's voice was chanting a spell.

I inhaled deeply and turned to Johanh, who had roused from sleep too, apparently from my leg's violent jerking and kicking. I told her what happened and she was scared and told me "I was dreaming that you turned your head to me, smiling blankly, while jerking your leg up and down and slamming it into the bed." Somehow we had shared a dream. It sounded like possession from what I've read in the past, potentially by a "mischievous demon". It felt like I'd been toyed with by an entity and my leg felt sore.

I have limited education around matters of conjuring spirits. Johahn and I both lay in bed trying to make sense of what had just happened, thoroughly spooked. I reminded Johahn of the Seal of Solomon necklace that I was wearing and showed it to her. I told her that I felt that I had left my bed, but in spirit form, and was floating around my home. I am fully immobile with my broken leg so it's impossible that my body left the bedroom. 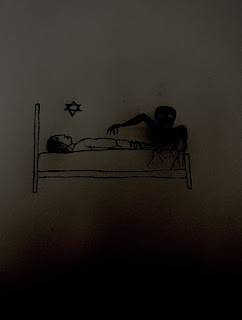 The above image is an illustration I created to capture my encounter with the "entity".
From this experience I am now very respectful of the contents of King Solomon's books. My leg has been broken for 3 weeks now and I've been lying in bed since then, waiting for the bones to heal. The point being, I'm completely immobile and this book brought my leg to life.

Please be careful if you ever dare to read these books. There is real magick contained within its pages and I feel it must be greatly respected. I am hoping I don't need an exorcist.